Previous Next
Click Here for Your Bhagavad Gita Starter Kit! 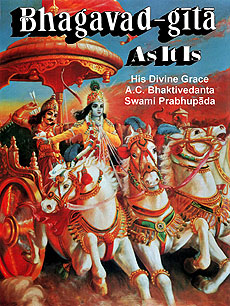 The Bhagavad-gita is universally renowned as the jewel of India's spiritual wisdom. Spoken by Lord Krishna, the Supreme Personality of Godhead to His intimate disciple Arjuna, the Gita's seven hundred concise verses provide a definitive guide to the science of self realization. No other philosophical or religious work reveals, in such a lucid and profound way, the nature of consciousness, the self, the universe and the Supreme.

His Divine Grace A.C. Bhaktivedanta Swami Prabhupada is uniquely qualified to present this English translation and commentary on Bhagavad-gita. He is the world's foremost Vedic scholar and teacher, and he is also the current representative of an unbroken chain of fully self-realized spiritual masters begining with Lord Krishna Himself. Thus, unlike other editions of the Gita, this one is presented as it is--without the slightest taint of adulteration or personal motivation. This edition is certain to stimulate and enlighten with its ancient yet thoroughly timely message.